Dispatches from the TV News Team

Fear. Anger. Pride. Hope. Starting on July 14 at the Toledo Museum of Art, visitors to the exhibit, “I Approve this Message: Decoding Political Ads,” will be able to see how political ads press these emotional buttons through imagery, music, and other techniques.

Co-created by Harriet Balkind, executive director of Honest Ads, who started her career in advertising, the 7,000 square foot gallery  features more than 50 of “the most emotional” ads from 1952-2012, such as the LBJ daisy ad that showed a little girl picking petals off a daisy until a nuclear blast fills a screen. That ad aired only once as a paid ad, but was covered so broadly by the news media that it became a sensation in Lyndon Johnson’s successful 1964 reelection campaign against Barry Goldwater, the GOP challenger.

The exhibit features ways for visitors to see how political ad creators play on emotion. For example, there is a 17-foot high screen showing annotated ads, with frame-by-frame explanations of persuasive techniques explained. A “Change” theater shows how message targeting has changed over time. There’s a “mood” room where visitors are dared “not to feel emotion” as they are bombarded with video images and audio. There’s also a place where viewers can create their own ads based on what they’ve learned.

“Our goal was to lift the veil on the persuasive techniques of political advertising to impact your emotions, so anyone who walks through this exhibit will never look at political ads in quite the same way again” says Balkind. “They will be more aware and look with a more critical eye.” This podcast in Slate features an interview with Adam Levine, associate director of the art museum and co-curator of the exhibit with Balkind.

The exhibit is running through election day, November 8, in Toledo, Ohio — a battleground state that will see more than its share of political ads by the time that day rolls around. 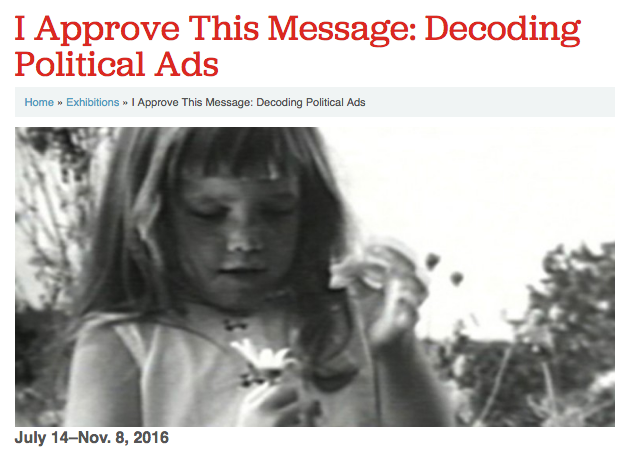